On the tenth day, they start to smile a little

They stand in groups, talk in low voices, and smoke cigarettes. First thought: "How dirty, dusty. Well, they came from the front, after all." Up close, it turns out that it is not dirt but fatigue. We look at the faces of soldiers who brought their wounded colleagues to the hospital, gray with exhaustion. We brought medical equipment - in one box there is a mobile X-ray machine, in two more boxes are external fixation systems.

Only military vehicles with a special permit are allowed to enter the hospital grounds, so we leave our car on a neighboring street and climb into the car of Major Yaroslav Havrysh. We are looking for a parking meter. "There are no fees," the doctor smiles. "Ever since we've been at war, you can park for free."

The hospital consists of several buildings. There is a lot of traffic. We have arrived on the day of a meeting between high-level Ukrainian and European Union politicians. The area is patrolled by soldiers with dogs looking for explosives.

"Do you want to see how we work? We'll show you, but don't take pictures of us. No faces," Col. Dr. Yuri Yarynich cautions. From the basement, where the warehouses are located, we climb up a dark staircase to the elevator bank. Blackout is a required safety measure; the windows are covered with cardboard. The elevator operator, looking at the doctor, says, "Sixth?" Fixed behind the cover of the elevator's button panel is an image of Michael the Archangel. 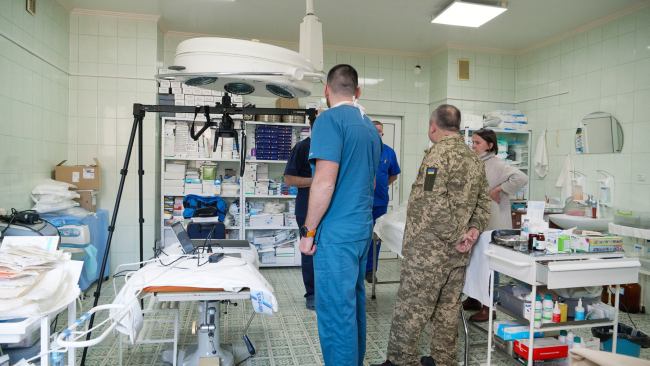 In the previous shipment to the hospital, we delivered two operating tables, surgical instruments and a portable X-ray machine. The one we brought with us will be sent to the front. 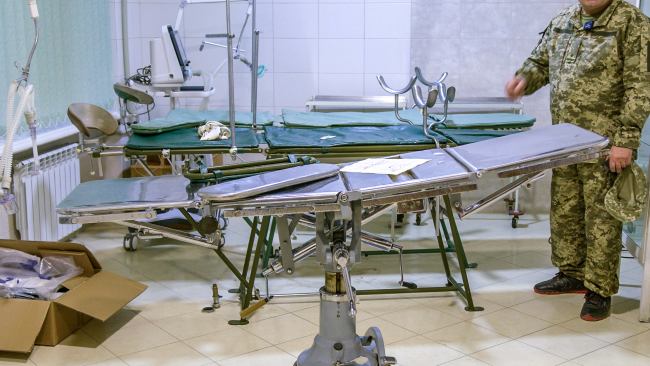 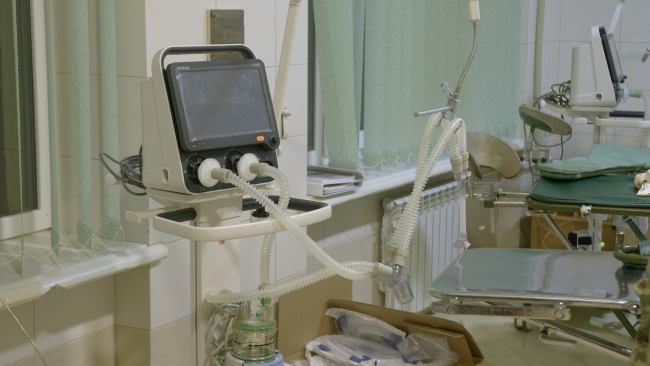 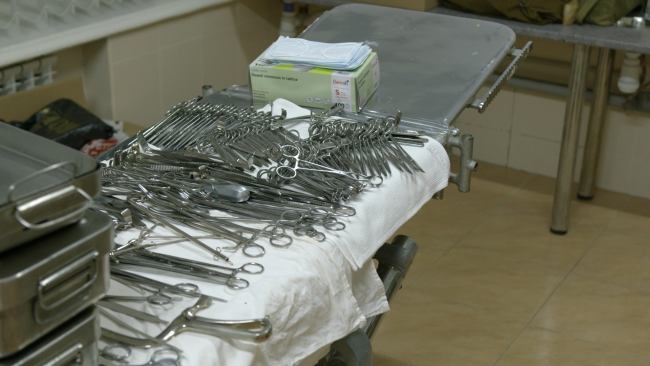 Rows of glass bottles, enamel bowls, emetic basins, a worn-out stool. The treatment room is a bit like a museum. An open laptop on the couch and an X-ray machine installed on a tripod above it. "You can take photos by holding these handles," says Dr. Yarynich. “This is a great device. You do not need a protective apron to operate it. Works for eight hours without recharging, takes 200 photos with one battery. We can consult on difficult cases during an operation. We send the photo to another specialist who tells us how to proceed.”

Difficult cases are most often the wounded with fragments stuck close to blood vessels. "Such a shard may be tiny, but very dangerous," the surgeon points out. "A three millimeter piece can do more damage than a five centimeter piece."

The wounded from the front are transported to the hospital by train or road. From the bodies, doctors remove fragments of metal, stones, trees and other objects that were in the victims’ surroundings at the time of the explosion. "It is so powerful that it throws a man hard enough to crush his bones," said Dr. Havrysh. On the screen of the laptop connected to the X-ray machine, we look at the shattered bones.

"Is it possible to save a leg with such a break?"
"Yes, we'll do a reconstruction."
"This apparatus helps us a lot, doctors, but also patients," emphasizes Colonel Dr. Grigori Prokhorenko. "You don't have to bring them to the x-rays. We do those in the hall where they lie. Those injured with such injuries suffer terribly. Every movement causes great pain. By using a portable camera, we can spare them."
"And here you can see the fixator." Dr. Yarynich shows a photo of the leg to which the external fixator has been attached; its task is to immobilize the broken bones. "It can be sterilized, but since we do not usually take it off for one to two months, and the number of injured people is constantly increasing, the demand is enormous."

Why does it take so long? "Because the wounds are dirty, as you would expect in a war. We treat infections and only then operate."

"If someone sees a box like the one you brought, he may think that we have enough equipment. But we get soldiers who have as many as five such fixators, and that is one third of the contents of the box," explains Dr. Prokhorenko. "Come on, I'll show you such a patient."

The stabilizers that we brought will be sent to Kharkiv, Donetsk and Mariupol. These are the places from which the soldiers were probably brought. "Good morning. We're only here for a short while," we say apologetically. The military will not tell us where the wounded fought or how many are currently in the hospital. This is strategic information. The room has six people. Tightly arranged beds, all occupied. The soldiers look 30 years old. Their legs are immobilized; for some of them, both legs. Pulling the covers back reveals vast wounds painted with iodine. They lean their heads on their elbows, look at us sadly. Only one nods as we wish for recovery and a swift end to the war. "Why was that man in the first bed on the right shaking so much?" we ask the doctor. "Everyone is shaking as they bring them. After seven days, it passes. On the tenth day, they start to smile a little."

It's a warm, sunny day. There are several couples sitting in the hospital square. All young people. Men in tracksuits, women with shopping bags in which they brought them food. They don't say much. They look straight ahead. 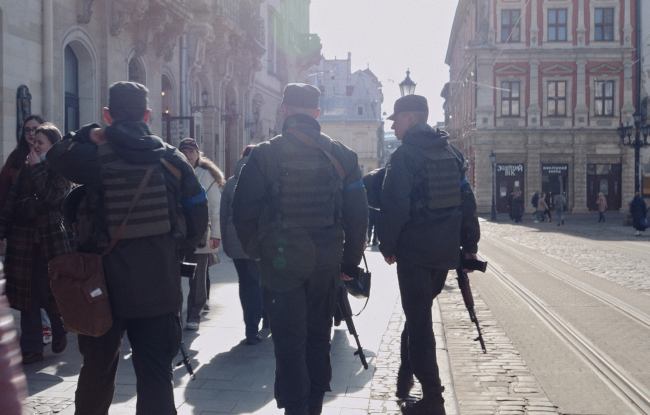 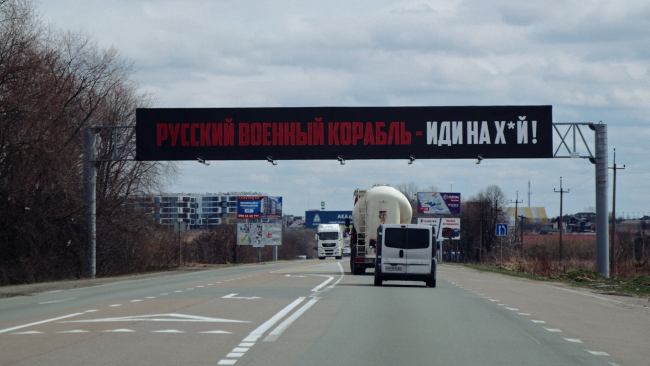 At the Korczowa-Krakowiec border crossing there are many cars. Apart from ours, there is only one other with Polish plates. Like ours, it has a piece of paper with a cross and the words "humanitarian aid". The queue moves slowly. We let Ukrainians with a dog pass. An old man takes the dog by the paw and has it wave at us from the back seat. Each car is meticulously searched. You have to take out all your luggage. Customs officers - only young women, who work in shifts - check the interior of vehicles, the contents of suitcases and bags. All cars with Ukrainian plates are packed to the ceiling. Clothes, pet food, bedding.